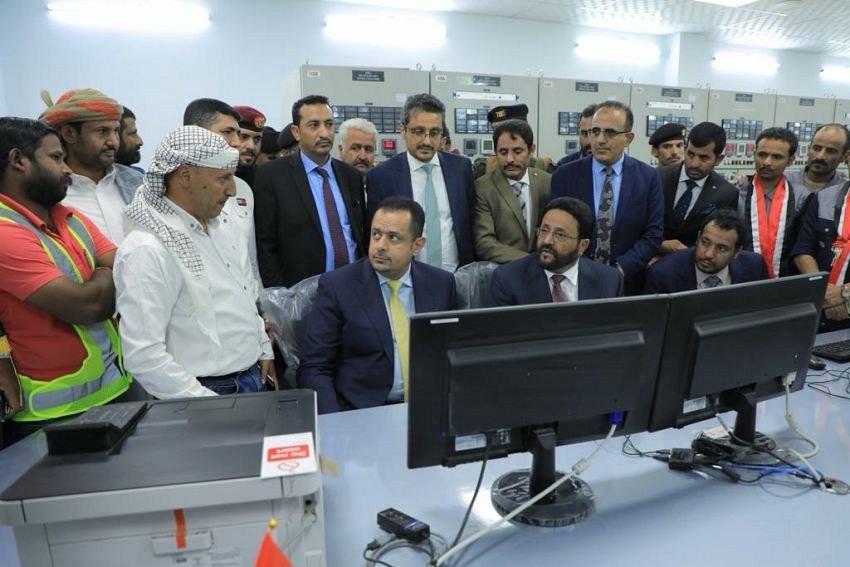 Member of the Presidential Leadership Council "PLC" General Sultan al-Aradah and Prime Minister Maeen Abdulmalik launched Tuesday the project of expanding Marib Power Station generated by Gas 132-133/KV and the first phase of power supply with the output of 126 MV. By opening the station, Marib will not need the energy bought from private companies from today on. After launching, Member of the PLC and Prime Minister toured the facilities of the station and listened to an explanation from General Manager of Marib Power Station Abdulhadi al-Shabwani and his Deputy Mohammad Dughaish on operating the station, which will provide Marib Province with energy.

Member of the council and prime minister were also briefed on works included in the first phase of the expansion, which cost USD 18 million to increase the output of the station into 176 MV. The station was providing only 50 MV. and filled the gap of need from bought energy from private companies.

The manager and his deputy pointed out that the station has energy more than needed with output of 56 MV. and this will help providing increasing numbers of displaced people and investors with power and will encourage commercial, constructional and investment recovery in the province. In addition, the station will save USD 5 million have been spent monthly from the state treasury to buy energy from private companies and will be transferred for development purposes.

They thanked the member of the presidential council and the prime minister for their efforts and support of constructing this strategic project, which is considered one of the biggest projects in Yemen. Member of the presidential council and prime minister praised efforts exerted by officials, engineers and workers in electricity sector in Marib and praised support of minister of electricity until accomplishing this strategic project. They stressed significance of doing maintenance work to the destroyed and old distribution networks and system of counters to consumers to collect the fees of power consumption.