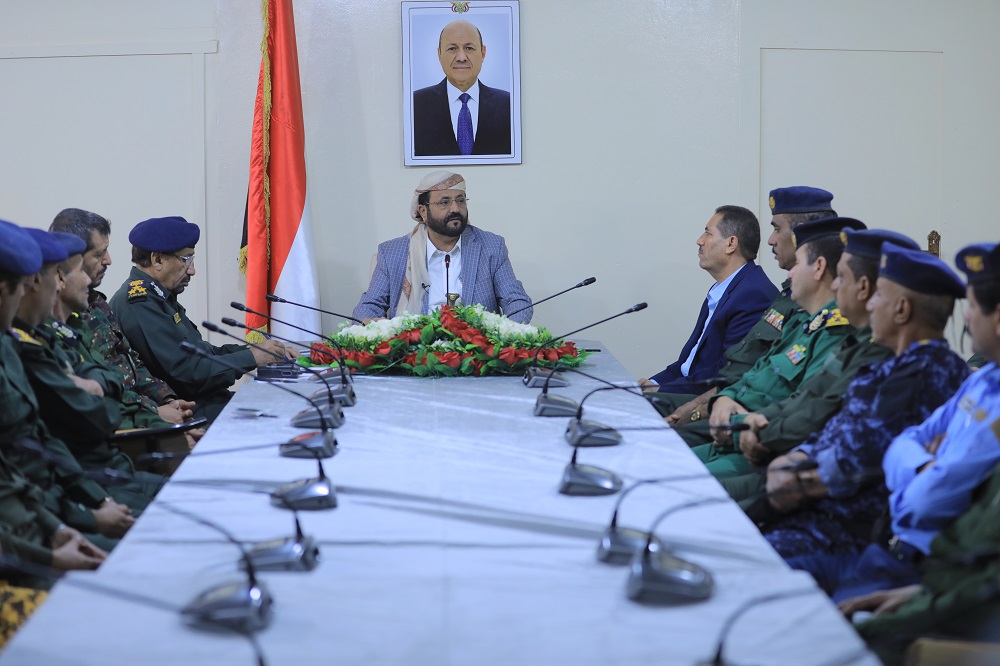 Member of the Presidential Leadership Council, Major General Sultan Al-Arada, chaired an expanded meeting of the security leaders in Marib governorate to discuss a number of security issues and files in the governorate, the level of implementation of the security plan for the current year 2022, and the most prominent difficulties and challenges facing the security services and ways to address them. During the meeting, Major General Al- Arada conveyed the congratulations and blessings of the President of the Presidential Leadership Council, His Excellency President Dr. Rashad Muhammad Al-Alimi and members of the Council to the leadership, non-commissioned officers and soldiers of all security units in the Marib Governorate, and his appreciation for all efforts made to maintain security and stability, protect public and private property, confront the Houthi rebel militia and thwart its terrorist plans. Major General Al- Arada reviewed the latest developments and the most prominent developments in the national arena at the political, economic, security and military levels, and the efforts made by the Presidential Council in the path of economic reform, providing basic services to citizens, alleviating their suffering, and limiting the repercussions of the humanitarian crisis caused by the Iranian Houthi militia. Major General Al- Arada affirmed the Presidential Council's full support for all security services and units in the Marib governorate, enabling them to carry out their national duties and responsibilities to the fullest extent, the Council's efforts to establish security and stability, apply law and order, and enhance the sovereignty of the state and its institutions, as one of its priorities during the current stage. He valued the tangible security successes achieved by the local security services and units during the past period, and their role in enhancing security and stability, protecting the general tranquility of citizens, combating organized crime, arresting criminals and performing all the tasks entrusted to them, praising the heroic stances taken by the brave security men during confronting the Iranian Houthi militia and supporting their brothers, the heroes of the national army and the men of the popular resistance in all positions of heroism and honor, and the great sacrifices made by the security establishment from its best leaders and affiliates over the past years in this national battle against the terrorist Houthi militia. Al-Arada noted the need to redouble efforts, enhance cooperation and coordination between all security and military units in the governorate, maintain a high level of security vigilance and high combat readiness in anticipation of any emergency, deal with all possibilities, and preserve the gains and achievements made in the security aspect over the past years.